2020 events are listed below

(either page down or click on specific event for more detail) 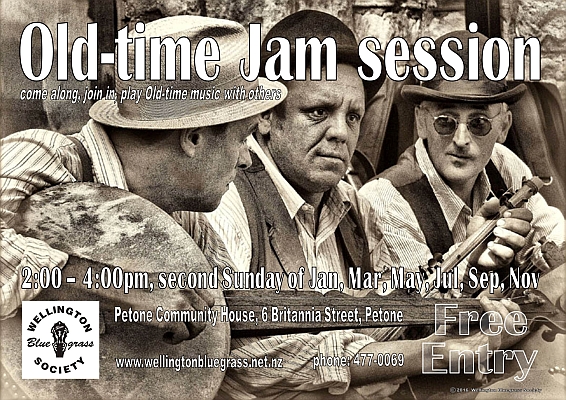 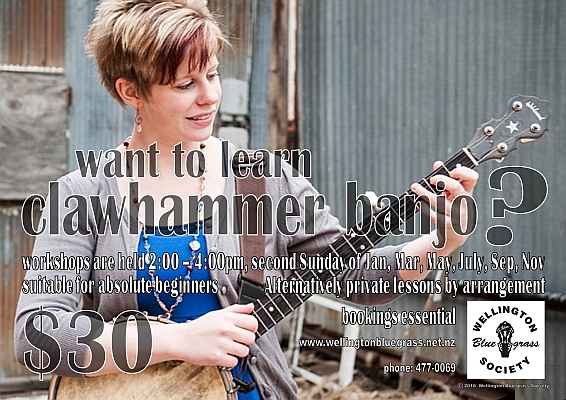 It will be held on the second Sunday afternoon of each ‘odd’ month (Jan, Mar, May, Jul, Sept,Nov) between 2pm and 4pm at the Petone Community Centre. 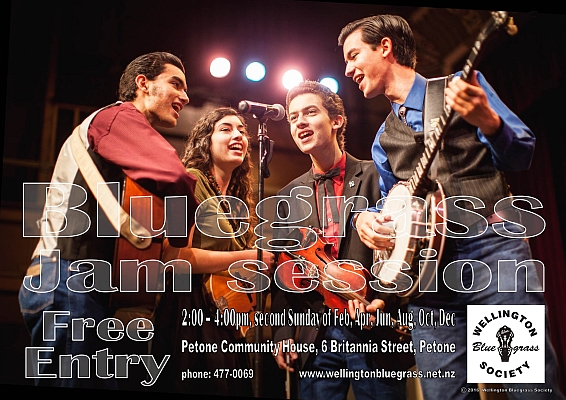 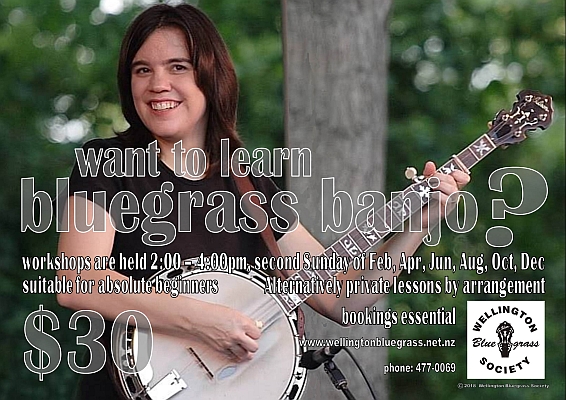 It will be held on the second Sunday afternoon of each ‘even’ (Feb, Apr, Jun, Aug, Oct, Dec) month between 2pm and 4pm at the Petone Community Centre. 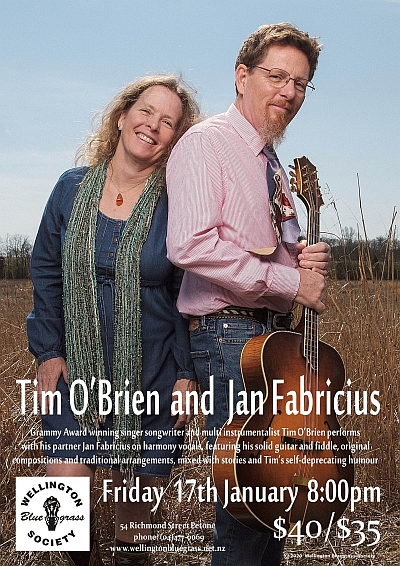 Notable O’Brien recordings like the bluegrass Dylan covers of Red On Blonde and the Celtic-Appalachian fusion of The Crossing led to Grammy winning CDs Fiddler’s Green (2005) and The Earls of Leicester (2014). In 2017, Where the River Meets the Road paid tribute to the music of his native West Virginia. The 2019 release, Tim O’Brien Band, features well known players Mike Bub (bass), Shad Cobb (fiddle), Patrick Sauber (banjo/guitar) and Jan Fabricius (vocal and mandolin). Shaping Tim’s blues, jazz and Celtic influences within a string band setting, they transform five originals and eight well chosen covers into his own unique brand of bluegrass.

Tim O’Brien performs in a duet setting with his partner Jan Fabricius on harmony vocals. Featuring his solid guitar and fiddle, performances showcase a range of original compositions and traditional arrangements, mixed with stories and Tim’s self-deprecating humour.

Jan Fabricius grew up in western Kansas. Her father was a wheat farmer and US Postal worker and her mother was a nurse. Her older sister Diane taught her piano and later mandolin. She played clarinet in her high school band and was in choir in school and church. She has attended the Walnut Valley Festival in Winfield KS since 1976 and also enjoyed attending various bluegrass festivals over the years, singing and jamming around the camp grounds. She is a Registered Nurse. She raised two sons and has three granddaughters. She started dating in 2011 and in 2013 moved to Nashville. The two play fiddle tunes and bluegrass songs around home. Tim and Jan started a label for singles called ‘Short Order Sessions’ which Jan added harmonies to some of those tracks. Then when Tim made his recording, Pompadour in 2015, she sang background vocals on several songs and was soon singing on stage with Tim. Her early influences include Nitty Gritty Dirt Band, Hot Rize, New Grass Revival, Guy Clark, Rodney Crowell and Norman Blake, amongst many others. Her vocals and mandolin are also featured on Tim’s recordings Pompadour, Where the River Meets the Road (2017) and the latest 2019 release Tim O’Brien Band. 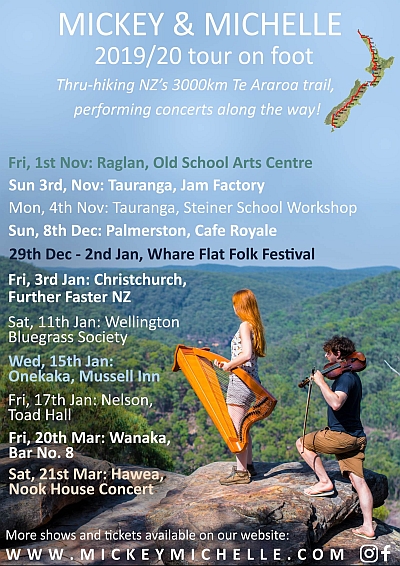 From Australia, Harpist Michelle Doyle and violinist/vocalist Michael O’Donnell have embarked on walking the Te Araroa Trail. They are also bringing their instruments with them to perform a series of concerts along the way. Their six month adventure will take them through the major cities, rural locations and scenic mountains while their instruments are couriered to each gig. The duo are thrilled to be releasing their debut album ‘A Walking Pace’ in this unique way and are donating 20% of sales from merchandise to osteoporosis research, a subject very close to their hearts.

Michelle was born into a musical family and has performed professionally on the harp from the age of eleven. She studied classical performance and has gone on to perform with Paul Kelly, Shane Howard and Fiona Ross. Her compositions reflect the deeply rooted energy of her Celtic upbringing whilst balancing her attention to detail and nuanced phrasing from her classical studies.

Mickey developed a passion for jazz and his playful improvisations are ever-present in his original compositions. His creamy voice is reminiscent of a young Chet Baker as he croons, growls and hums his way through uniquely poetic lyrics and soars through ethereal high notes.

Together the two combine their skills to create a unique and exciting blend of contemporary folk music. Come see Mickey and Michelle in concert as they perform until their fingers are as sore as their feet are. 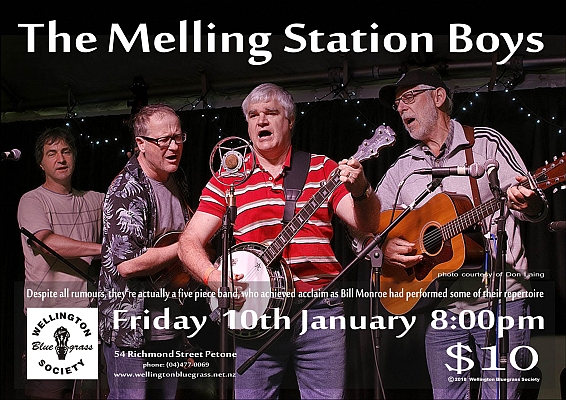 This effervescent group from the heart of the Hutt Valley has been made famous courtesy of NZ Rail.

“We are the best bluegrass band in Wellington. We know this, as there are no other bluegrass bands based in Wellington, hence we rightfully assume this title. At our last appearance at the WBS, we were known as the Melling Station Boys. Since then we have changed our name to The Melling Station Boys, as we feel this makes us sound much more important. Over the last three years we have been hired to perform annually for the Christmas party of a local group, however they decided to get another band last year. Reason: none given. Admittedly they didn’t pay us, so that shouldn’t have been a factor, but we conclude that we got too good for them.

“We are very happy for our adopted sponsor, NZ Rail, who inadvertently gave us a railway station as our mascot, and at no charge (to date). We’re not worried that a train derailed there about ten years ago, when it tried to angle park next to the railway station. That manoeuvre clearly failed, resulted in sick leave for the driver and huge payouts to all passengers on that particular service, and in addition, over the following few weeks, subsequent services having to park about 100m from the station whilst the wreckage was sorted out. Despite this, we continue our support to NZ Rail by performing at least one train song during every performance.

“After our last appearance at the WBS, two people confirmed verbally, and to us directly, that we are not bad. We know there were other comments, all said out of earshot, however we assume they were all positive, but as they couldn’t be heard, also said by people that retreated far enough away from our company, so we have been unable to confirm this.

“For this show, we will have our full five piece lineup. This includes Giacomo (who is not in the photo), who throughout the last year spent more time out of the country with international audiences than here. This is as opposed to the rest of the band, who spent more time in Wellington than anywhere else in the region. Giacomo was so busy that he only attended two band practices last year. However he has attended more than that this this year. Consequently we are positive that things are looking up for 2020.

“Being a Lower Hutt band, we are striving to become as famous as our local hero Gerry Paul, who can play every instrument in our lineup better than any of us, and can muster a much more famous lineup than we could ever hope to. However we are resigned to the fact that at the minimum, all we will manage is to just having that dream.

“At the conclusion of our show, you will be served with a complimentary cup of Dilmah tea, or two. You may even get a slice of our renowned date loaf, if you are lucky, all provided on the house.”

“These guys are fantastic!”
– anonymous

“Wow, I got see must this guys!”
– first Facebook comment for this year, interpreted and traced to someone in Uzbekistan

“We’re famous for not being famous!”
– The Melling Station Boys

Ed:
“Usually bios are written in the third person. However as The Melling Station Boys were unable to encourage, summon, plead nor pay anyone to write their bio, they wrote their own, in the first person.”